When it came to making sails for Kensa, we didn’t need to look too far to find a good sailmaker. We’re very lucky to live down the road from Collins Sailmakers, which just happens to be run by good friends of ours. The main reason we chose Collins, however, was because Nick made our sails for Planet when we went away on our trip. Having used these sails every day for two years, in 40 degrees of Greek sunshine as well as 40 knots of Greek wind with very few signs of wear at all by the time we got home a few thousand miles later, we know they are sails we can rely on.

We spoke to Nick about the rig and sails for our boat from early on in the project while Si was drawing up the sail plan in the later stages of his design. Very generously, Nick suggested that in the spirit of our project we might like to be involved in the making of the sails as well and we jumped at the chance to do this.

We spent one Saturday down at the loft building the mainsail; learning from Nick how the various stages of the process fit together and having a go at things ourselves. Si spent a summer while he was at university working for a sailmakers in Falmouth, so had an idea already of how machines worked. I was less useful, given my ineptitude with even the most basic of sewing skills, but took plenty of photos to make up for it.

Si then spent several evenings leading up to the launch working on the main and mizzen in the loft and consulting Nick whenever he needed to. In the days just before our launch, with no time to spare and the mainsail not quite finished, Nick very kindly stepped in and completed it for us in his own time. Following the launch, Simon finished the mizzen himself.

To give you an idea of how our sails were made, here is a ridiculously over-simplified step-by-step guide to the process, illustrated by photos and explanations of how we built our mainsail. Our sails are very traditional and simple when compared with their modern counterparts, and I can’t stress enough the level of skill that goes into making a sail. This is just a Blue Peterish glance at the basics:

1.Design sail, choose material and cut the panels. In our case, the sail plan was done by Simon and then passed to Nick, who used his software to cut each component panel out on the plotter. In the past this process would have been done by hand, but now sails are able to be cut precisely to a digital design (much like Kensa’s kit-like framework); saving time, materials and ensuring accuracy. There’s a little time lapse video of the plotter cutting our mainsail panels here. We chose a hard wearing tan cloth for our sails. Not only is it the most traditional option, it’s also the most practical given the amount and type of use they will see. Fish blood and guts on a white sail would not be so becoming! In the past, when sails were made of natural materials like flax or cotton, they were tanned with cutch (a vegetable extract) and oak bark to protect them from rotting or perishing in sunlight or damp conditions. 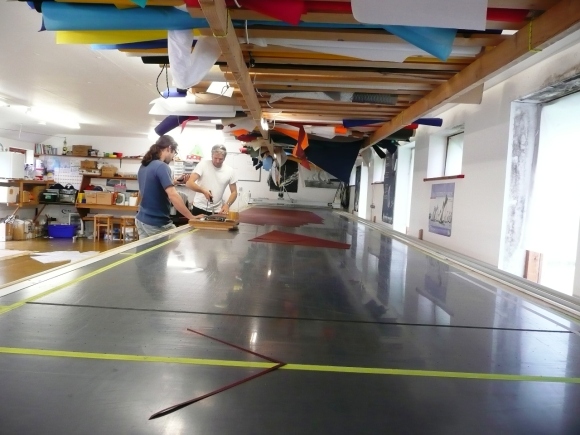 2. Glue together and seam up panels. The cut edges of the cloth are first sealed with a hot knife, then the panels are glued together with double sided tape before being machine seamed to form one single, large panel. 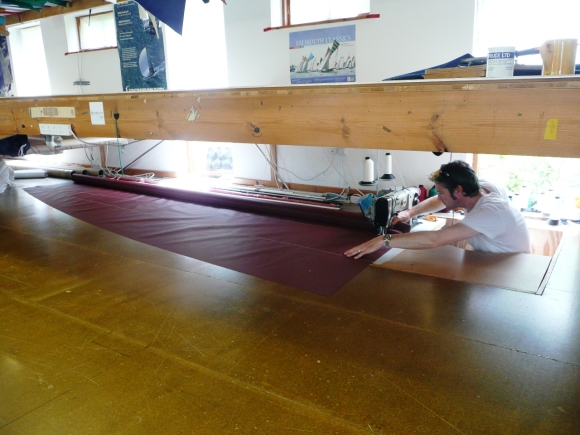 3. Cut and tape up the leech. This is the vertical edge of sail furthest away from the mast.

Once the sail was all in one piece, Nick trimmed this to shape and stitched a tape into the length of it for strength.

4. Make and fit patches. As with any other item made from cloth, sails need reinforcing locally in places where they are going to be under most strain or subject to chafe. This is typically going to be near the peak, tack, throat and clew (the corners of a gaff or lug sail). 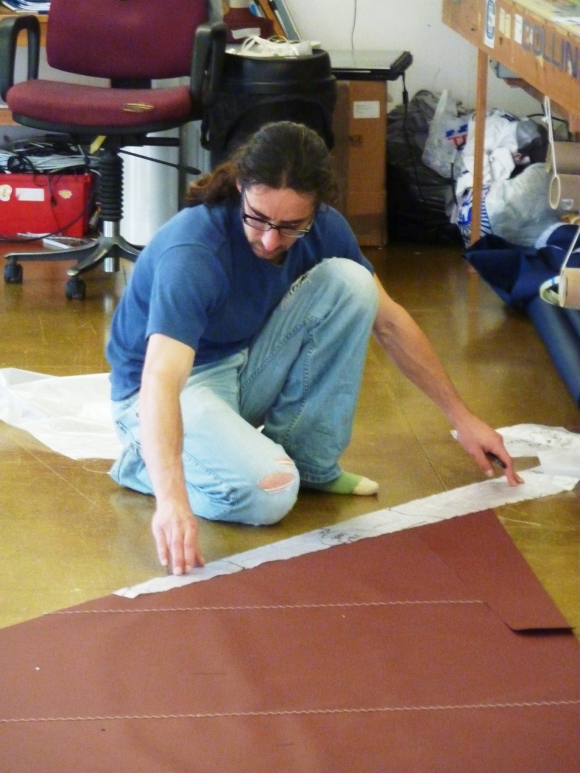 Si worked to make up patches and tape them in place, which Nick then seamed up on the machine.

5. Add cringles, reef points and eyelets. Seeing the sail as it was below at the end of our day in the loft made it feel as though it was almost finished, but in reality there was still quite a bit to add. We purposefully chose a very simple rig for Kensa, so accessories (there’s probably a technical term for that…) were minimal. 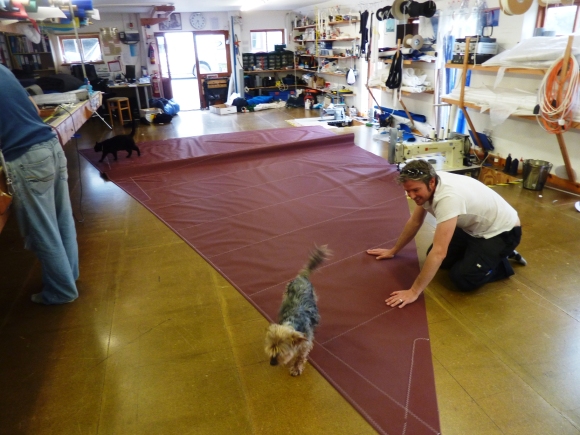 And here it is a few months later, along with the mizzen, on their first trip out back in October!

One thought on “Sailmaking”