Leave a comment
By Cat Boat build, Our boat

Some jobs during the boat build felt as though they took proportionately far longer than they should do given their eventual importance on the boat. At least in my head. For example, I did not for a minute begrudge the time and effort that went into making Kensa’s keel; this is an important part of any boat. Everyone knows that. Some parts of the boat however, like the sheer clamp and the carlins, were quite the opposite. To be fair, their ultimate quality has a huge effect on the structural integrity of the hull, but nobody knows what they are, you can’t see them in the end and they took ages to make and fit. 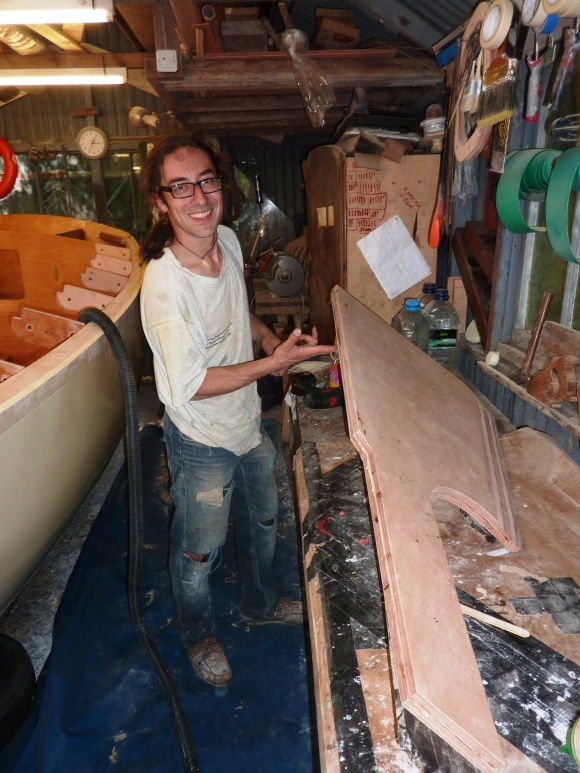 So imagine my joy when we set about making a rudder and tiller for Kensa. Here were readily recognised nautical items, imperative in the manoeuvring of the boat and yet surprisingly quick and easy to make! This is one job I could have strung out for ages, making us look like heroes….but having written half an honest post (half a post honestly that is, rather than a half honest post) I am too lazy to go back and start again.

Essentially, what happened was…Si designed the shape for the rudder, which was CNC cut along with other components out of ply in three pieces ready to be stuck together like a sandwich. We glued these together, sanded them, then coated them twice in clear epoxy. Then we painted it. That was the rudder.

For the tiller, we found a suitable piece of oak and worked out where to cut it to by measuring it up against the boat. Then we shaped it so it was pretty and easy to hold, epoxied it and varnished it. And then we joined the rudder and tiller together with a bit of stainless bar that we had lying around and bolted the rudder onto the hull. To be fair to Si, the stainless pintles and gudgeons (essentially a boatbuilding word for a gate hinge) that we used were made up of profiles designed by Simon and cut by Steve at Fibrefusion. They fitted perfectly and proved to be a very neat and efficient way of bespoke fitting a rudder to our hull. But that was it! Job done! 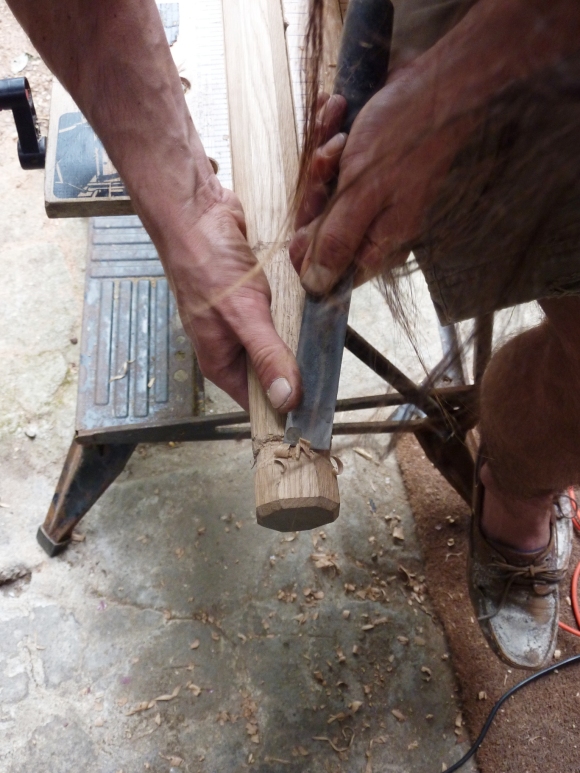 There is one other thing. The piece of oak that we used to make Kensa’s tiller was in fact given to us, along with several other pieces of old unwanted timber, by Graham Thomas, the landlord of our excellent local pub The Plume of Feathers. The oak came from the Plume and had been in the cellar there unused for as long as Graham can remember. So if we end up in the pub at the end of a day’s fishing, we’ll know to blame our tiller!